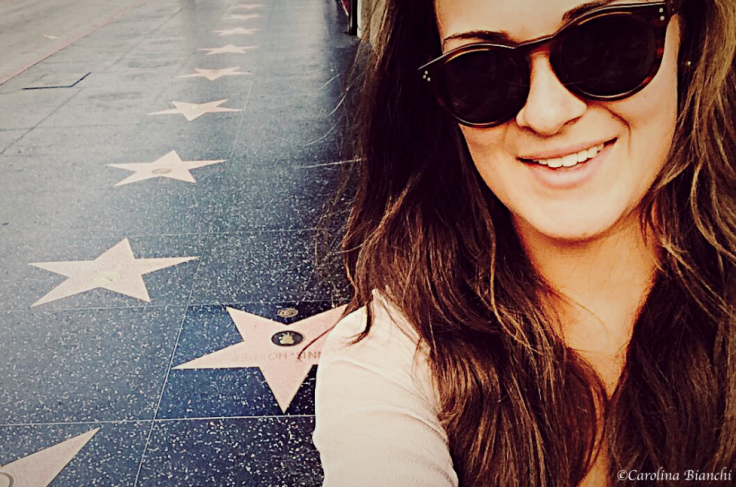 It’s really fun to discover new places during this trip, especially when it gets to the Hollywood scenery.

Spending most of the day in the car and driving through Beverly Hills and Bel Air, where most of the famous artists, from singers to actors, live, was truly intriguing. It was exciting to pass by so many beautiful chateaus and, as we weren’t equipped with the guide that tells which VIP lives in what house, we tried to guess who could be living where, and how many bathrooms/bedrooms the house has. We did the guessing for some houses, not all. But truly, it is nice to see these places in real life and not to only hear about them or see them in television or magazines.

Finally, after being in the car until early afternoon, our next destination was Hollywood Boulevard, to visit the famous Walk of Fame [check out the website for more information, events and ceremonies: www.walkoffame.com. It is unbelievable how approximately 2500 famous artist’s names are engraved in stars in a two kilometer sidewalk on both sides of the street. This means: so many artists, who have created so many masterpieces. I bet most of the tourists and people who walk by the stars out of curiosity, have thought, at least just for a moment, of ways of how to become famous themselves and have their name put in there.

On the Boulevard there are also so many souvenir shops, restaurants and museums (such as the wax reproductions of famous people in Madame Taussauds) that engage in the Hollywood world. In a way, I have been ignoring all the shops and bars as I was too concentrated to read all the names of the artists on the floor. One can also visit the Universal Studio Hollywood to see the environment in which the actors and actresses work.

Another important must-do was to go and see the famous “HOLLYWOOD” sign in real life. We were actually quite far from it, but the sign still seamed enormous. The letters are in fact 14 meters tall and the sign is 110 meters long. It is an incredibly large sign, and I believe it is probably one of the largest in the world with such great importance. It is interesting how it was originally created for a local estate development in 1923, and then, as the sign gained increasing recognition by the people, it became and still is today, one of the main symbols of Hollywood.